4 Steps for Influencing Hiring Managers (and Becoming an Indispensable Advisor) 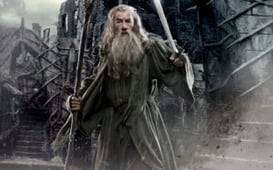 Hiring managers want two things from recruiters above all else: speed and quality—usually in that order.

“They want someone really, really fast, and they better be good,” says John Vlastelica. He’d know: his company Recruiting Toolbox has worked with dozens of big-name enterprises and held focus groups with hundreds of hiring managers.

He also knows what the best recruiters do to deliver that speed and quality—and now you can know, too. John recently shared his tactics and best practices at Talent Connect 2017 in his top-5 rated session.

Read on for four of the steps John shared to help you recruit better candidates quickly and make your hiring managers’ dreams come true.

1. Push back on wildly unrealistic expectations

The top-performing recruiters are great at engaging their hiring managers and getting more out of them—and John’s given detailed tips on how to do that before.

Working closely with managers also means leveling with them and having a frank conversation about expectations.

To improve your speed, the first step is helping the hiring manager understand what’s actually realistic. “I love hiring managers,” says John, “but many of them are ridiculously unrealistic… Having that realistic expectations conversation has a huge impact on speed and quality.” 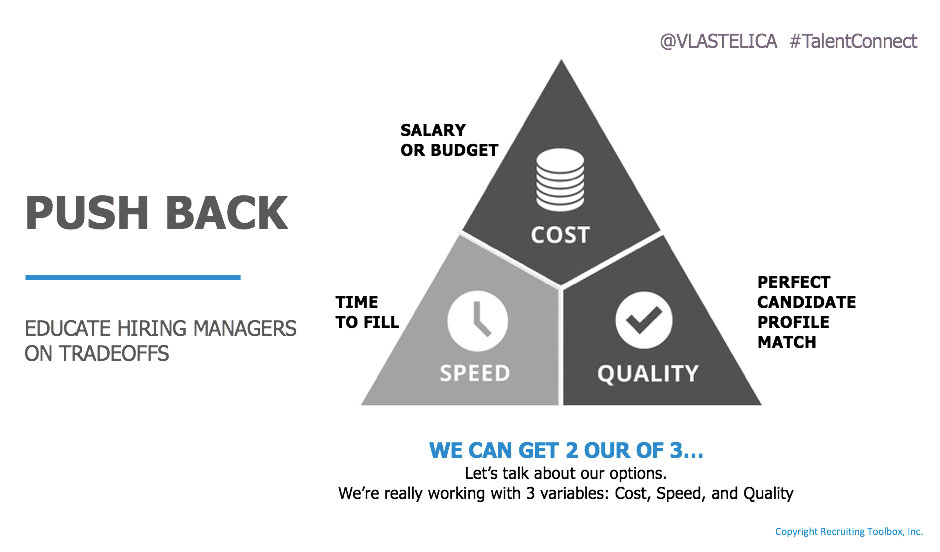 Lay out the three variables: speed, quality, and cost—then tell them that they can only pick two.

Explain that if you want someone super fast and cheap, they probably won’t be very good. If you want to hire someone who’s really good, really fast, the company will have to pay a lot more—great workers aren’t cheap. And if you want someone good at a reasonable rate, it’s going to take a long time.

Having this conversation from the start can help you both have an understanding of what “speed” means, and what you’ll have to sacrifice if it’s truly the top priority. Of course, your hiring managers will want to hire someone relatively fast, but now they’ll appreciate what it takes and why you can’t just “do it faster.”

To find the right people faster, it’s absolutely critical that you and the hiring manager calibrate your target candidate as soon as possible. John recommends using another triangle to prove this point: 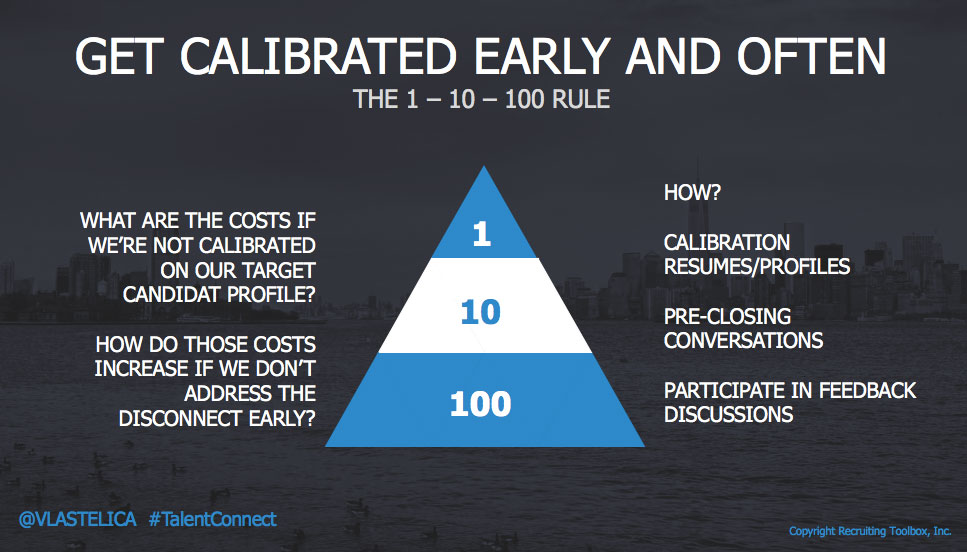 It’s called the 1-10-100 rule, and it basically means that you should tackle problems when they’re small. “I’ve drawn this pyramid on hiring managers’ whiteboards and talked about the costs that exist if [we] aren’t aligned early,” John says.

The same principle holds true for recruiting: if you discover that you and the hiring manager are misaligned after you’re already bringing people in for interviews, it’ll cost a lot more than if you had resolved it from the start.

Get calibrated quickly early on by coming to your kickoff meeting with a bunch of resumes or candidate profiles that cover disparate backgrounds, experiences, and skills. (They don’t actually need to be available candidates, it’s just an exercise.)

Let them pick and choose their favorite parts of each one. “Hiring managers who regularly struggle to articulate what they’re looking for [...] can often look at calibration resumes and profiles and better describe what they want.”  The sooner you and the hiring manager are calibrated, the sooner you can get a quality hire.

One technique to lock down that profile is to pre-close the hiring manager in the same way that you pre-close candidates. With candidates, you’d ask “if I gave you an offer of XYZ, would you accept?”—with hiring managers simply ask, “if I find a candidate from Company X who’s got Y qualifications and makes $Z/year, would you hire them?” Go back and forth until they agree they’d hire a hypothetical candidate with a certain set of qualities. That becomes your target candidate profile, and you just saved yourself hours or days of guessing at the “I’ll know it when I see it” profile. 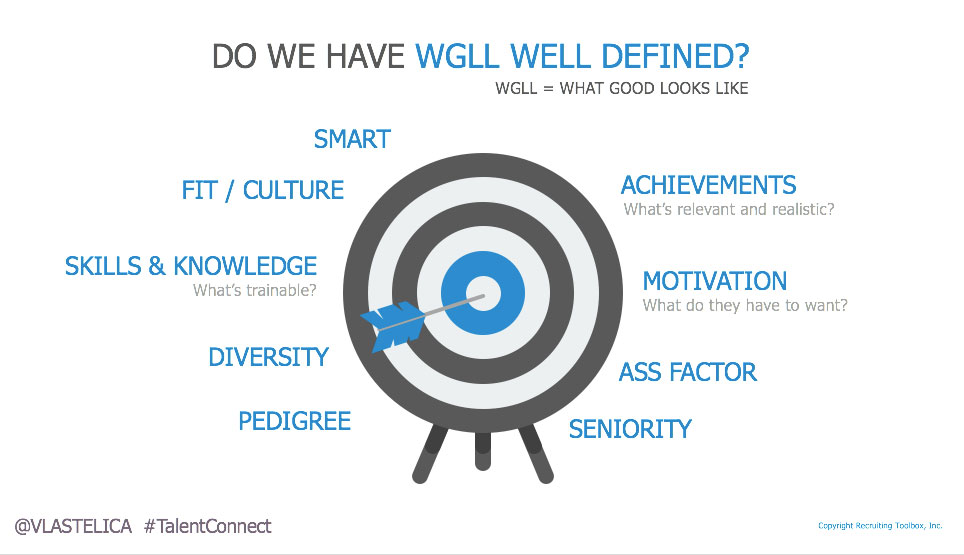 Dig deeper into all these areas to uncover exactly what the hiring manager (and business leadership) wants. Some companies care a lot about a fancy pedigree, while others know it’s not really predictive. Some will insist on “culture fit,” while others will focus on “culture add,” recognizing that “fit” is often used as a way to discriminate.

One often-ignored aspect that John likes to get clarity on is what he calls the “ass factor.” It’s “how we think about people who are brilliant, but asses,” says John. Some companies will tolerate a rude, defensive, poor collaborator as long as they can deliver top performance, while most would never hire an ass; they get that top talent is repelled by asses, and hurt their team-oriented culture.

“You likely have a personal point of view on these things, but are you and the hiring manager and interviewers all aligned?  If you want to hire quality, you have to define quality first,” says John.

John sees recruiters on a spectrum: at one end, there’s feedback-chasers and note-takers—recruiters who play a very small role, if any, in hiring decisions. Great recruiters evolve to become true influencers: those who actively share their point-of-view and are an essential part of any hiring decision.

“It’s critical we play a role in those debrief meetings - we should be helping to keep the hiring bar high, challenging bad decisions, and helping hiring teams improve the way the evaluate and select talent,” says John. 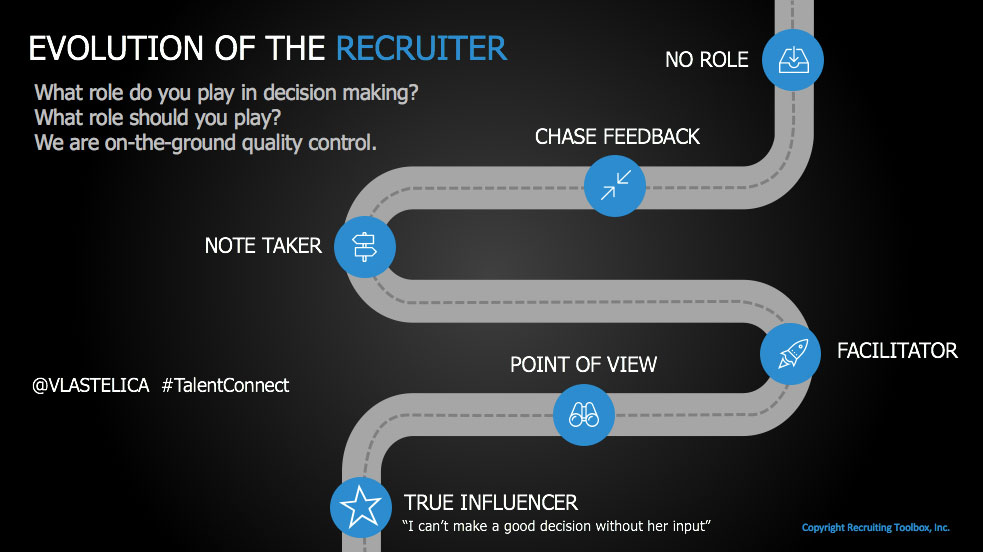 By following these tips and tactics, you’re not just recruiting a bit better—you’re getting hiring managers engaged and raising your own stature at the same time. Keep practicing, and you won’t be seen as a nag who’s taking orders and filling reqs: you’ll be a real influencer and an independent asset to hiring managers and your business.

“So many hiring managers describe the relationships they have with recruiters as being more of a processor, a req filler, with a focus on compliance and consistency and forms.  But, when you help hiring managers go faster and hire better quality, you are winning!  You are a true talent advisor,” says John.  You can learn more about the custom Talent Advisor workshop that John’s team creates for clients at www.TalentAdvisor.com.