Stack Ranking: What to Get to Git Programmers 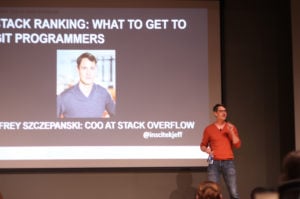 Matt Grove shares insights from Jeffrey Szczepanski, COO at Stack Overflow who spoke at one of his favorite sessions at Talent42, the national tech recruiting conference, held each June in Seattle.

This year’s Talent42 Conference kicked off with Jeff Szczepanski (aka Tall Jeff), Chief Operating Officer at Stack Overflow, taking the stage. Stack Overflow is one of the most impactful platforms in the tech world, and it was amazing to have thoughts from the COO. Jeff is a true tech business leader (he was previously a CTO and built several large tech organizations) who has excellent insight on why hiring tech people is so hard and some ideas on what we can all do to improve it.

“Tech is the Wild West Today”

Jeff used the analogy of building skyscrapers throughout his session to illustrate an industry with well defined job titles and competencies and how this is absolutely not the case in tech. “Tech is the wild west today. Imagine how hard it would be to source for construction if there was no standardization and everyone just called themselves a ‘skyscraper maker’ instead of an iron worker, a plumber, an electrician, etc.” For there to be efficiency in tech hiring, we need to get away from the Wild West days and move into something more structured and disciplined.

“Most Job Listings are Terrible”

Jeff said “job descriptions in tech describing what programmers do is like saying we want a construction person to just build a building with doors and windows and not fall down. Most job listings are terrible and just scratch the surface”.

Amen, brother. I know all of us, whether tech recruiters or hiring managers, feel the pain and want to do it better. We here at Recruiting Toolbox have thought a lot about this and have put together a free download to help you improve your tech job postings, so let’s all raise our right hands and commit to doing this better.

“Lack of Sophistication Leads to Pain”

At Stack Overflow, they are trying to move away from keywords and really align on more of a competency level that is actually predictive of success.

Jeff asked, “How often would you stack rank the resumes or LinkedIn profiles in the exact same order as your hiring manager?” This led to audible laughter in the room.

He referenced the Programmer Competency Matrix by Sijin Joseph (which provides 32 key competencies and their differentiators plotted on a logarithmic scale), and talked about the difference in productivity of programmers and the need for organizations to have 10x programmers, regardless of their years of experience, because they continue to grow their skills and output exponentially when compared to the average developer. But hiring managers aren’t always looking for these 10x developers, even though they say they want them.

“Hiring managers don’t know what they want, and there are billions of combinations available across the differentiators within these 32 competencies. This lack of sophistication around all of this leads to pain around sourcing and everything else that we encounter.”

"Sourcing today typically spends its time on Languages, Platforms, Years of experience, skills, and that kind of thing.  But that is only 12% of the entire programmer matrix - all else is left to chance or misunderstanding.  We need to do better."

The Path Forward, According To Tall Jeff

Stack Overflow is working hard to help their hiring managers understand a better approach to defining what they are looking for by defining and using personas. (Not sure what personas are? We’ve got you covered with a free download from Recruiting Toolbox.)

“One of the biggest things we are doing is creating personas for programmers – we have identified 5 so far. Different employment brands attract different types of people and the people you hire into these positions can vary a lot. We also need to break away from the classic wild west case where a hiring manager only cares about algorithmic skills. That is only one competency. We need to look for the right balance of all 32 competencies. We need that kind of discipline for developers.”

And, Jeff says, productivity and compensation would ideally be linked to something other than internal equity, and would create different, positive, team dynamics.

“Developers should be more like actors who get paid according to the value of what they create. But it’s more of a team orientation in development and today 10x programmers are working with average programmers, which is a problem. We have to find a way to build 10x teams and pay them for their value. If we hire a new developer and their compensation is higher than the existing team members on their team, then everyone at the level of that new hire on the team would ideally get a raise to the same compensation level as the new person. Now that new developer isn’t competition, they are your new best friend.”

Imagine that for a minute. Pay based on the value of what developers create and automatically raise compensation for the entire team when we hire someone new whose is paid more and who dramatically enhances the value of that team. Definitely a big departure from the way most companies think about compensation and good food for thought.

Yes, we’re still in the Wild West phase when it comes to hiring tech people and no one, not even the COO of the top tech platform in the world has solved it yet (but he is working on it)!

To improve, we can do three important things - increase our own level of sophistication and discipline to define the role, spend time and energy with hiring teams to identify the right competencies from the entire programmer matrix, and be conscious of how we reward our people. To learn more about making this shift, check out Stack Overflow blog as well as free resources to download at Recruiting Toolbox.

Who is This Blog Written For?

We write about talent acquisition trends, strategies, tactics, tools and events to help corporate HR and recruiting leaders be more effective and win at their jobs.
Subscribe

Recruiting Toolbox, Inc. is a specialized management consulting and training firm that helps companies recruit better. We partner with heads of recruitment and HR to build and deploy the corporate recruiting strategies, processes, tools & training that align to their unique talent goals, culture, budget, and resource model.
+ Learn more

Recruiting Toolbox works with clients across the globe from its base in Seattle, WA, USA.
+1.425.557.2100
» Email Us
» Meet us in Person
Subscribe to Our Blog/Newsletter
Tweets by @RecruitToolbox