Scaling Without Sacrifice, the Lyft Way 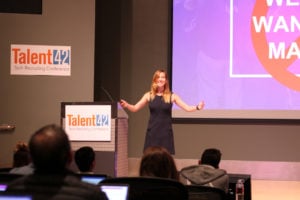 Linsey Jackson, Head of Tech Recruiting at Lyft, faces a challenge that most organizations experiencing hyper-growth face: how to maintain quality as hiring volume is going up. During her session at Talent42 2017, Linsey shared how she addressed this challenge by focusing on improving efficiency, source optimization, closing rates, and diversity.

Driving all of this was data, particularly funnel metrics, where they were able to measure the amount of time spent on interviewing, where top talent was coming from, and the impact of sourcing on diversity hires.  An additional data point that was deeply analyzed was offer declined reasons, as they needed to understand why offer accept rates were as low as they were.

Improving efficiency was critical to enable the Lyft recruiting team to keep up with the increasing volume of hiring.  They were able to reduce interview hours by an average of 6 hours (out of an average 40 hours of engineering time to get to one hire) by implementing a 2-hour homegrown coding test (they also leverage design tests).  Additional benefits from introducing these tests included a reduction of bias in the process (by adding a 2nd blind test grader who reviewed the code), and an expressed appreciation of the test being in the process by their candidates.

With engineering growth as high as it was, it was highly problematic that they were experiencing a 40% offer acceptance rate.  By looking at their decline reasons, they were able to identify the root causes of this low offer accept rate, and enacted changes which doubled that rate within a matter of weeks.    Changes that they enacted included a more intentional effort to ensure that their interview loop teams were prepared and effective, a greater focus on identifying their candidates’ key motivators early and selling directly to those motivators, and introducing their candidates to employees who were well aligned in background and likeminded.  Through all of this, their candidate experience improved, and their process became more relevant and impactful – all contributing to an improved 75%+ close rate.

Diversity recruiting in tech is a challenge that all companies face.  Lyft addressed this by focusing on creating a culture where diversity was highly valued.  The Lyft recruiting team shifted to devote 25% of their time on diversity sourcing, focusing on set targets and using heat maps to identify the greatest opportunities to make an impact.  Linsey believes that diversity makes all pipelines better.

She also believes that creating a culture of recruiting, where everyone is accountable and involved in the end is more effective and more fun.  By engaging their employees proactively and defining calls-to-action for employees to get engaged, Linsey and her team was able to make a significant impact on their ability to make quality hires fast in a hyper-growth and hyper-competitive environment.

Corporate Recruiters: Who Is Your Customer?

Video Interviews: The Next Generation of Bias?